New Zealand King of the Road

It was 6 a.m. and I decided to grab the day by the horns. Looked at the weather forecast and it said you are good to go for the ride around the block. I had pre-planned the route and decided it was time to Numb the Bum. Packed my bag and headed to the fuel station for the first top-up of many. Receipt, photo, odometer check and away I go. Weather was stunning and traffic was light. It was a great run down to Bluff which is at the Bottom of the South Island in New Zealand.

The Bluff area is one of the earliest areas of New Zealand where a European presence became established. The first ship known to have entered the harbour was the Perseverance in 1813, in search of flax trading possibilities, with the first European settlers arriving in 1823 or 1824.

This is the foundation for the claim that Bluff is the oldest permanent European settlement in the country. However, the missionary settlement at Kerikeri was both earlier and larger. The town was officially called Campbelltown in 1856, became a borough in 1878, and was renamed Bluff in 1917.

So that the first History Lesson. Second leg was onto Haast which you have to pass through Queenstown.   Queenstown, New Zealand sits on the shores of the South Island’s Lake Wakatipu, set against the dramatic Southern Alps. Renowned for adventure sports, it’s also a base for exploring the region’s vineyards and historic mining towns. There’s bungee jumping off Kawarau Gorge Suspension Bridge and jet-boating on the Shotover and Dart rivers. In winter, there’s skiing on the slopes of The Remarkables and Coronet Peak.

Once I departed Queenstown it was a night ride through dense West Coast Bush and what a rush that was.  I felt very lonely at this point. No traffic but there were possums on the road jumping out to scare me. Haast is an area in the Westland District territorial authority on the West Coast of New Zealand’s South Island. The Haast region covers over 2,500 square kilometres.

Now Haast was done and it was the 3rd leg up to Nelson Via Westport. Now it’s a hot bloody 30 degrees Celsius. I stopped at Nelson in a forest park for a real man’s power nap. 1hour 15 minutes and I was as fresh as I was when I started. Now onto Picton which is where the Ferry’s sail across to get to the North Island of New Zealand. Grabbed a drink and some lunch and off again for Raikia. Now I am more determined than ever.  I can smell the finish and yes of course my body is in need of a shower.

The body is starting to cramp up and is tired. At this point I want a bath and bed. Another stop for some food and an energy drink and I’m good to go. Now that I see the last destination point I can relax. Walked in, got my fuel receipt and photo recorded against odometer. I am busting for the loo and a sit down for a coffee. And just like that I had 20 minutes left to spare on the 36 hours. As fast as I started the journey it was over. But I would go again but take a mate or two just to break up some of the boredom and fatigue. Once you complete this milestone you feel like a new person and the freedom it gives you when you’re on the road is like nothing else.

Thanks for your time to read this journey from Down Under. 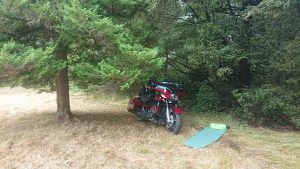