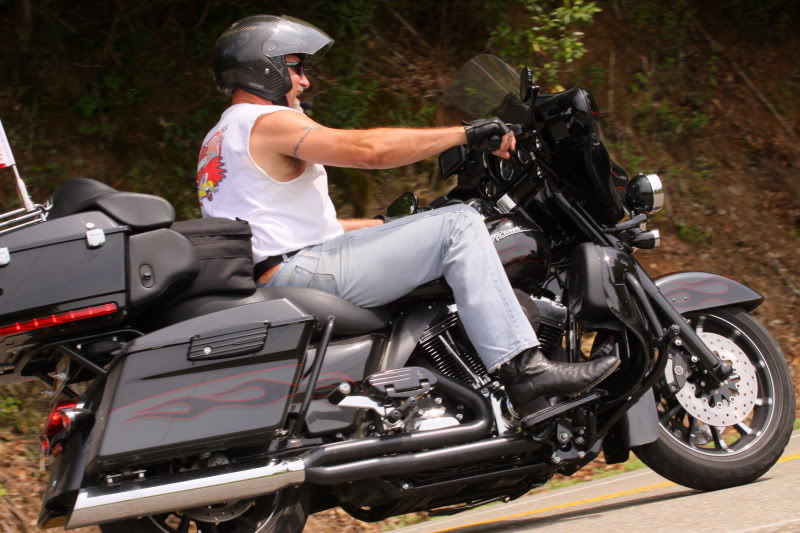 “I rode the inaugural Coast to Coast ride for LDR with Jack Powis and Red Barnes – Jacksonville, Florida to San Diego, California in 47 hours. To say this was the ride of a lifetime does not do that trip justice. It was more fun than riders should be allowed to have on two wheels. Rode my 2007 Harley CVO Ultra on that ride. Have since traded that bike for a 2010 Harley CVO Ultra. I also have a 2002 Harley Road King Classic. On those 3 bikes combined I have ridden well over 100,000 miles. I started riding when I was 15 and had several other bikes, starting with dirt bikes and then trading those in finally for street bikes. Currently am a Regional Manager for a food ingredient company and have been in this business for 33 years.

Over the past few years have ridden from coast to coast, from the Mexican border to Canada, and lots of states in between. I ride with a group of guys – the Peckerheads – each year in the Smoky Mountains and we always have a blast. My wife Lisa and I travel by bike and have been all over – including the Florida Keys a few times. Currently we are planning a trip from Florida to Texas that will include the Big Bend National Park and the surrounding mountains. My dream rides… travel by bike from Alaska to Florida and also take an extended trip on the Pacific Coast Highway with plenty of side trips.”