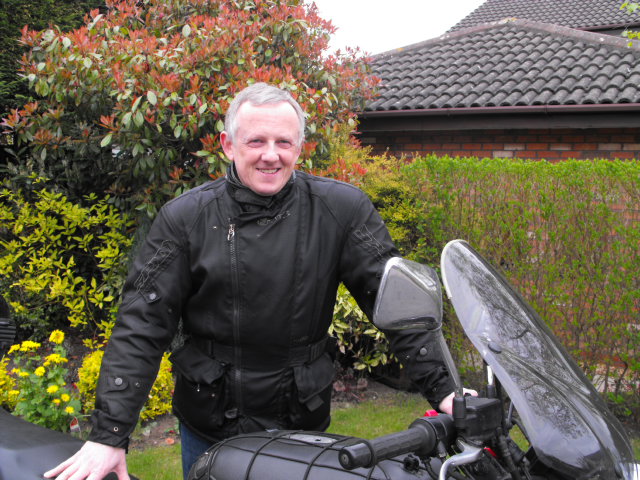 I have been on 2 wheels since the age of 16, as soon as I was able to obtain a provisional licence in the UK. My first machine was a Honda SS50, small in power, but definitely big on impact, as it started something that has been part of my life ever since. It pre dated the restrictions that were eventually put on mopeds, so would do a massive 45mph. 48mph down hill. I progressed to a Honda 250 Super Dream (Hawk in the U.S ?), when I was 17 and passed my test 2nd time round, after `approaching junctions too fast` on the first. Next bike in line was a Suzuki GS550, my only deviation away from the Honda brand. A lovely bike on which I completed my first UK End To End, (Lands End to John `o Groats), in 1980. I thought this ride would be a good way to run the bike in and the journey was completed within a month of purchase. I think I was starting to find myself being drawn to riding long distances. The Suzi was sold in 1985 and after a short break without a bike, for reasons I can’t remember, I purchased another Honda, this time a CB900F, a bike I had spent much time admiring in various showrooms, when it was one of Honda`s flagship machines. I contented myself with relatively `normal` recreational riding for some years and apart from a few visits to Northern Europe, these rides tended to be in the UK, although I was still being drawn to rides that promised a bit of adventure. In the mid nineties, I bought a bike that was to become my mainstay. Another Honda, this time an NTV650. I am now on my second, the first being sold after completing 132,000 very reliable miles. My current bike, will pass the 100,000 mile barrier this Summer. Many riders probably find a bike or brand they love and this is definitely mine. In 2001 I took the Advanced Test, with the Institute of Advanced Motorists. Although 23 years had passed since my initial test , I felt it wouldn’t do any harm to accept the challenge of taking another, more structured one, particularly as the one that existed in the 1970`s was observed by an examiner on foot! Having done it, I felt I had made up for the lack of formal training that existed when I started riding and even after riding for so long, I still found that I got a lot out of it. In 2002, I had the opportunity to join a group of riders who planned to circumnavigate the globe. This resulted in a 95 day, 32000 mile ride, through 15 countries, including Mexico, North America, Canada and up into Alaska. The route also took us through Australia, South East Asia and India. It was during this ride that I came to know about the long distance riding community. Since returning from that adventure I have completed 17 Iron Butt rides and the LDR designations outlined above. I would love to return to America and attempt the LDR coast to coast. Another aspiration would be to ride the Trans Siberian Highway.