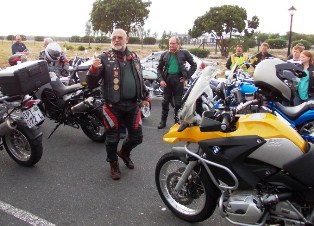 Favorite Ride: : Any long distance ride is a priority. However the most awesome short ride is Clarence Drive on the eastern side of False Bay (I`ve sent a picture before)

Future Rides:I`m planning a 4 Corners of South Africa GOLD as well as 1500 miles in under 36 hours

I’m a person of many interests. I always say that if I live to 300 years I might be able to do half the things I want to do. I`m an amateur photographer who claim that there is no better camera as an Olympus as I`ve been using these since 1974. As a rock hound I`m happy to have traveled the world and being paid for it. In 2010 I also had the opportunity and used it to do a Ride Like A Pro riding course in George after which I rode the Tail of the Dragon 3X in 24 hours and then part of the Smokey Mountain Pathway and the Blue Ridge Parkway. This was during the Fall of that year and absolutely amazing. I have 5 different long distance certifications under my belt/