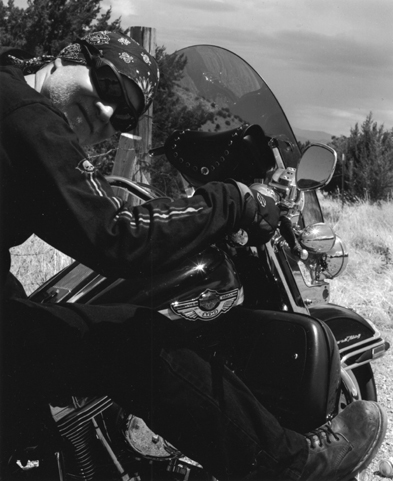 Dwight built his first bike starting in ’64 as he was being discharged from the Marine Corps, a ‘55 Panhead Chopper. Riding over 40 years, supervised the building of a touring Harley without a front fairing in ‘91. Shown in the H-D Ride in Show in Sturgis that year then Daytona. H-D introduced the Road King in ’94. Dwight worked on the first MotorClothes show in Sturgis for Karen Davidson, was a model in the Harley catalog and guest of the Davidson family for a ZZ Top Sturgis concert that year (‘91) In ’03 showed his latest, an ‘Ultra King’, a Road King with everything from the Ultra Classic except the front fairing. Showed at the H-D Ride in Show, Sturgis that year. Though Dwight has talked with the execs of H-D, they have yet to introduce this model. In honor of Harley-Davidson’s 100th, Dwight took the year to criss-cross the US, including, the Lincoln Hwy, Route 66, Santa Fe Trail, Lewis & Clark Trail and rallies like Daytona, Laconia, Laughlin, Sturgis, Milwaukee, over 20,000 miles.