A Long Distance Rider is Born! by Henrik Nielsen

When I first met Holger, he was a boy, just 13 years old and a son of one of my friends. At his young age, he already had a good eye for my motorcycle, so a couple of years later, I took him for a ride down to the harbor and back. He was tense, but who wouldn’t be at age 15?

As the years passed, he contacted me from time to time when he wanted my opinion about this or that, and suddenly, he graduated high school, got a driver license, had his own home, etc. He bought a car, and the year after, a motorcycle. In Denmark, there is a law that youngsters are only allowed to ride motorcycles not bigger than 500 ccm. After 2 years of riding, they have to pass another test. Only then can they ride the bigger motorcycles. Consequently, he bought a 500 ccm Honda.

Last year, a lot of things happened to Holger. His days in the military were over, he and his girlfriend broke up, and his father died. So when I heard from him again, he had sold everything he owned, except for the Honda, and was living in Australia for a three month period!

He contacted me because he had some thoughts about visiting Italy with a friend, on his Honda. He had never rode long distances before, so I suggested that we do an “Easy Rider” challenge when he came home to Denmark, just so he could have the experience before he went to Italy. He agreed, and while he was flying back from Australia, I planned our ride.

On 24th of May 2019, we started our trip. We rode across Sjaeland and to Fyn, taking the world’s third longest suspension bridge. Then we stopped for coffee (and a cigarette for me). Crossing Fyn, we passed the town of Odense, where the famous writer Hans Christian Andersen was born. Then we crossed another big bridge, and we were in Jutland. The very moment our tires hit the soil of Jutland, the rain started. Heavy rain. We had to take cover for a half hour until the rain stopped, but by then, my GPS had drowned! Fortunately, we knew the way back, it was straight north. As we came up to the north, the wind raised and the temperature dropped. Finally, in the afternoon, we reached Skagen, the northernmost town in Denmark. Due to the delay we had no lunch there, only another cup of coffee, and then it was the same way back.

I had decided before we started that we would break no speed limits. But on the way back we were “very close” to breaking them anyway. Suddenly Holger rode up to me, and gave me the sign – we had reached 805 km on his odometer and had accomplished the Easy Rider designation. I know from previous rides that the odometers can be incorrect, so we rode on for another 30-40 km until we reached Nyborg. Then we visited a gasoline station, filled the tanks and made the guy at the station sign our ending form.

We rode across the bridge again, this time with the setting sun on our backs, and did the 80 km to my home at a relaxed speed.

It was a good trip. Not one single time did I hear Holger complain, he just rode on, and I am proud to call him a riding-buddy. I am sure he will do many rides in the years to come.

Another Long Distance Rider is born! 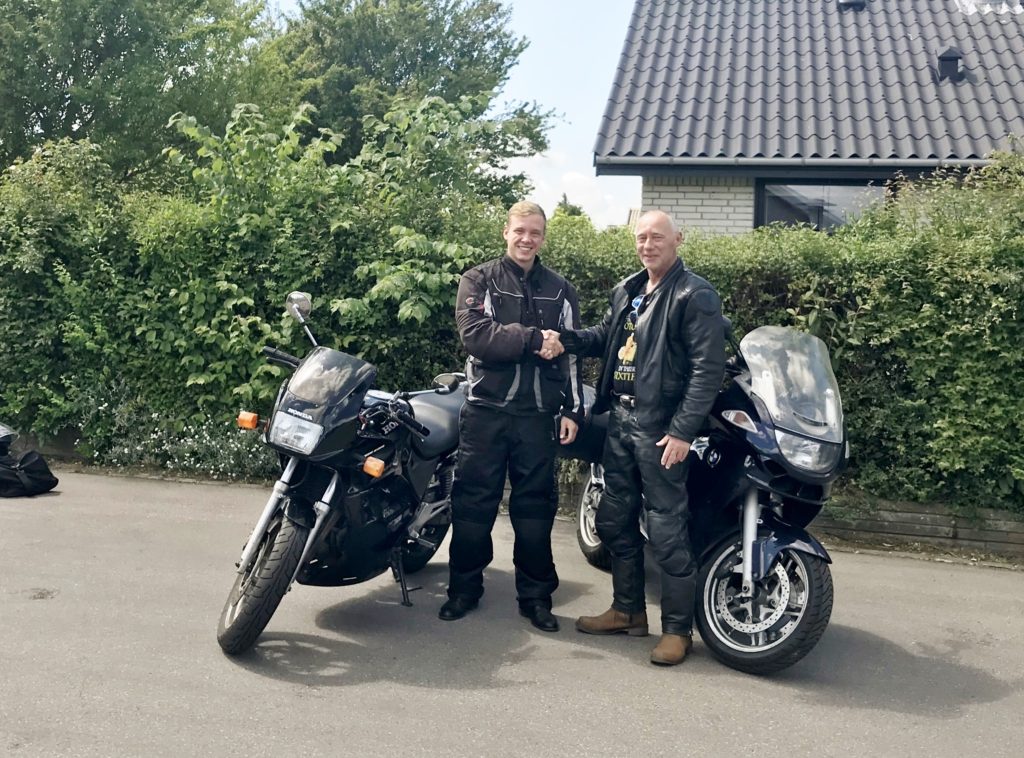 No Replies to "A Long Distance Rider is Born! by Henrik Nielsen"