On this ride, Bard Flageborg and I concentrated on abiding by the speed limits and traffic regulations.  Gas stops were quick and efficient, and photos not really part of the scheme.  The planned time was about 23 hrs, and we made it …almost right on time.

Planning for this trip started in the fall of 2017.  Both Bard and I had suffered major accidents previously, and had to take into account a “body adjustment training” to ensure the necessary endurance.  My friend Bard had been run down in a traffic circle in 2015 on his Harley and I had killed a Moose in 2016 with the handlebars of a ZX10R.  I was basically “busted up” in all kinds of ways. Fractures and cracks in most ribs, left shoulder, breastbone, 2 in my neck and one in my spine, abrasions, punctured lung etc…. Bard had different injuries that could have been serious enough, but he was lucky.  The Harley took almost 3 years to rebuild, I replaced the ZX10R with a ZX10RR from the hospital bed …. So yes, we’re nuts….  I crashed in October, and was driving again in January.  The crazy genes just won’t let go.

The route started in Grimstad, the south of Norway  (most of the distance with enforced speed limits under 50 mph), and went through Sweden in the dark with wild boars and all kinds of antlers lurking along the roads.  Imagine hitting a low slung wild boar with your front wheel….so we had all kinds of illegal lights lit in all direction for a few hours through the forests. Then traveled through Denmark and Germany with much better roads and conditions.

One of the main problems we had was getting the route right.  Today, all planners are “dynamic” which means the mileage changes according to real time traffic and detour changes.  A ride that was planned using TOMTOM for 2054 KM, would jump to under 2000 km and up again.  We were really looking at a 2500 km ride, but for safety sake, we left the last bit in a loop around Berlin.  We didn’t want to push our luck too far. At one point we just had to nail the distance, which continues to change almost daily.   We were determined to “do it right” and adhere to the speed limits as well we could, and not scare the crap out of the rest of the traffic.

When we finally got to Berlin, 23 hours later…we were in pretty good condition.  Thought we would get to the hotel, unload luggage, take a nap, and try for the next 500 km within 36 hours.  But that was a bust, the hotel was packed with check outs, and we couldn’t get to our rooms before 3 PM.    Safety first…so we dropped the last leg.

Driving through Norway can be exasperating due to single file traffic, low speed limits and unending serpentine like traffic dominated by mobile homes as wide as the single lane. Sweden is better, because the traffic is different and the speed limits slightly better for most part.  Denmark is a dream, in all senses, but not really exciting.  Germany can be a real hassle.  Endless road works in progress, a lot of traffic, but a good pace along the highways when you’re lucky.  The secondary roads can be really slow going.  We were very lucky, partially because we chose Sunday morning.

If you’re going to validate the ride:  Norway, Sweden and Denmark are “all plastic” payment at the pump (at least along the main routes).  So you don’t even have to put down the sidestand when filling gas.  Germany is a different animal.  I have never seen an automated pump there, that doesn’t mean it doesn’t exist, I just haven’t seen it.  So here you lose time at every stop.

Our driving “regime”:  Both bikes use about the same amount of fuel and have the same size tanks.  Drive about 150-200 km.  Stop and fill gas get the blood circulating, independent of how much is left in the tank. The trip took 11 tanks….and at 10 minutes (minimum) at each, that’s at least 2 hours lost.  We should have taken more pictures, but it just wasn’t on our minds.  We had trained ourselves to conserve energy and fluids on long drives like this.  So there were no food stops for 24 hours….. a few bites of a hot dog, save the rest, a few drops of water, save the rest…..What goes in must come out.

Rides like this are “man and machine” experiences.  DO NOT DRIVE with a partner than can’t afford to stop if it gets unsafe.  Have your card ready at every stop, do not continue if unsafe…  Driving in a group is stressful, and can be really difficult, because all have their own pains and thought.  You have to be well paired in driving skills, accepted driving style, and speed choices.  Some of my best friends are not on my list for this type of drive.

Some Norway Photos from Rolf 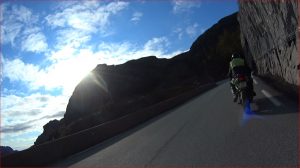 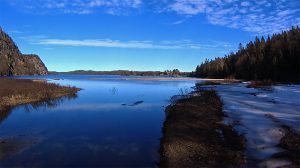 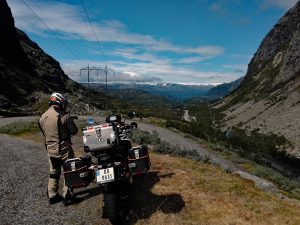 Four Friends on the Road