This was to be our third attempt at the Easy Rider in 2017, and with two spectacular fails under our belt, on the way to BMW Motorrad Days in Garmisch, we were determined to get there.  The motivation was really all to do with my eight-year old daughter Holly, who had been pillion riding for the last 12 months.  I had done many rides of distance, but never for a ‘Certification’.  When I came across the LDR, and noticed that the youngest achiever was the same age as Holly, it was game on.

We needed to complete this during the school summer holidays and so we decided on a ‘loop’ for the route. Using the sat nav for assistance, we decided to travel up the East side of England, travel West towards the Lake District and then South and East to the start point.  Three stops for fuel (bike and us) should do it.  The loop should take 9 1/2 hours riding time, so contingency there as well. Everything seems fine then.

There is a garage in the town of Melton Mowbray that we selected as our start and finish point. We got to the garage, filled up with fuel, got the first receipt and the initial form signed.  08:06 and we were on the clock!  Travelling up the A46 to Newark, the sky was very grey, bordering on black, and was threatening rain (but it wasn’t forecast until 4:00pm that afternoon).  We then encountered a heavy shower, which coincided with a young passenger crying ‘I’m hungry!’ down the intercom. We were near to a service station so an impromptu stop for food, drink and the donning of waterproofs as called for.

We then joined the A1 and travelled up to Newcastle on Tyne. We passed the sculpture ‘The Angel of the North’ but time was ticking by and so we only got to view it as we motored on.  Travelling Westwards, we were roughly following the course of Hadrian’s Wall (the Roman wall diving England and Scotland). Bad move! Being slap in the middle of harvest season, there were many tractors pulling hay bales, trailers or manure. Since the road was all one lane each direction, the going slowed down, and the queues of cars were immense. Another impromptu stop, this time for fuel and lunch. Whilst watching the world go by over a sandwich and drink, a lone Harley rider pulled in and we explained our task, after exchanging normal pleasantries. We then set off in opposite directions.

Before reaching Carlisle, we turned North and popped over the border and into Scotland (just so Holly had an extra dimension to her story).  Where better to do that than Gretna Green and the famous Blacksmith’s. By this time Holly was getting cold and we devised a way to put a very large waterproof jacket onto a very slim, young girl without it blowing up like the Michelin man. We were now just over half distance, but running at 6 3/4 hours.  Time for a quick re-think.

Our original plan was a nice run down through the Lake District but that would be mainly single carriageways, full of traffic, etc, and we could not risk getting caught in queues or dropping the average speed too much. So we joined the M6 motorway (Interstate in the U.S.A.) and headed South. Fortunately, no bad weather was encountered so Dad just got a little cool as time, tiredness and age took their toll.

At Stoke-on-Trent we moved back onto ‘A’ roads again and travelled East to the M1. Very uneventful, just a mile-munching exercise. Joining the M1, we knew that this was within striking distance of the finish, but time was not being kind to us. We had a very small margin with which to complete this task.

As we rolled back into Melton Mowbray, we realised that we still needed another 4 miles to ensure that we completed a minimum of 500 miles, so a quick trip through the town and back was called for.

We pulled onto the forecourt of the garage, filled up, got out the paperwork and went in to pay. 19:50 it said on the receipt! Jubilation all round – 16 minutes to spare. Get the final signatures; take the photos of the speedo, and breathe out! Both father and daughter were cool, tired and elated. All that remained was to complete the evidence and send through for verification.  Would we get an Easy Rider? Would Holly qualify as one of the youngest? The jury is out, but the paperwork is in!

Would we like to do this again, perhaps at a longer distance/time? You bet we most certainly would!!

To anyone contemplating their first certification ride – it’s in the planning as much as the riding. Be adaptable; roll with the situations you meet, and most of all savour the moment!  Ride long, ride safe, enjoy.” 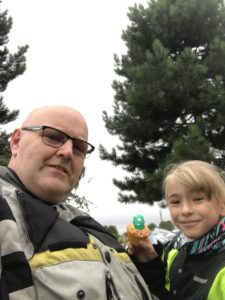 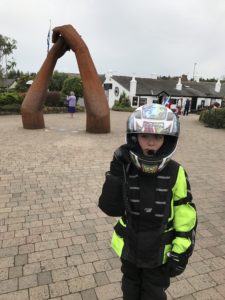 No Replies to "Third Time Lucky??"