Me, My Mission & My Machine 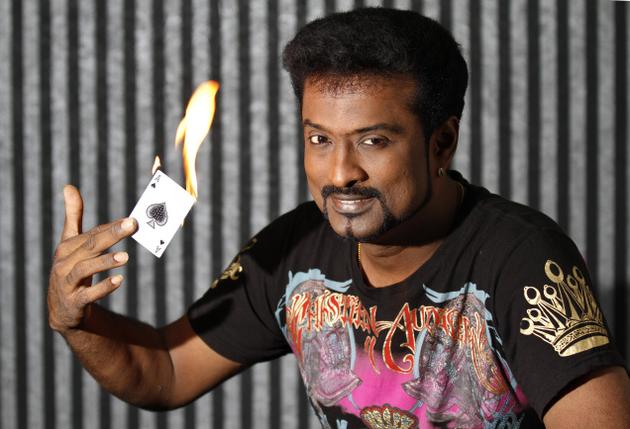 Sebasti Arul Christopher Vasanth (SAC Vasanth) is a magician, illusionist and laser show artist, who performs shows globally. He was titled, “Master Magician” by Star One television in 2010.

Vasanth attended CMS Arts & Science College in Coimbatore, Tamil Nadu, India.  He spent a few years as a lecturer, then switched to becoming a full-time magician, an art he has practiced since childhood.

He has appeared on many television shows including Fox History and Entertainment in BBC and Comedy Circus ka Jadoo with Sony Entertainment Television in India.  Some awards and honors have been the Global Leadership Awards for Excellence in the Art of Illusion and the Best Innovative Magician Award to name a few.

Below, in his own words, is a recap of his “King of the Road” experience.

It all started when my friend Premnath Kashinath induced me on an early morning cycle ride with a conversation about endurance and torchere and mentioned the Long Distance Riders club.  From that day, I wanted to do the “Long Distance Rider” challenge and test my endurance with my “Harley Davidson Fat Bob 2014 FXDF”.  Days passed by and this ride was getting delayed.

One day on our regular Sunday ride when my fellow bikers invited me for Mr. Naren Rajan’s Memorial ride to Kotagiri and on the way back a friend, R.Uday Kumar and myself stopped for a coffee.   Uday came up with a question on my interest to do the LDR ride . I expressed my thoughts and was glad to know, that we were on the same page. We decided that if it has to happen – we have to talk less and get to work and do this ASAP. We fixed a meeting with the man who we know and had already done such rides with IBA – Mr. Sankar SG.  After a valuable discussion, we posted a date in the LDR & IBA Facebook page and contacted Mr. Jyothish Babu who gave us valuable tips on GPS tracking and apps along with maintaining Bills & Records required as evidence to obtain membership.

But, the ride got postponed for the 2nd time and then again a new date, with too many advises and confusions with the new route plan which was – “Coimbatore > Pune > Coimbatore” for an attempt in completion of FULL THROTTLE 1000 miles and “KING OF THE ROAD” 1500 miles together.  As Prem was not in town, Uday and I decided that – if we postpone the date again .. We will not attempt ever – Which actually gave us the fire to start on 07/05/2016, 04:00am.  The fire was so high that even the first rain of the season could not stop us or our journey.

Taking up this challenge – is the challenge.

The Ride:  The determination to complete is the key.  Safety was the first and foremost point.  We knew that the roads will be tough and new to us. Friends suggested to have breakfast bars & energy drinks along the way, but , I preferred music and it worked . After all it is a matter of choice and preferences.  My Machine cooperated so well, in all moments of my ride. “I actually felt the connect that day”. We developed communication and it was a great feeling .

Uday’s bike tank was 1/2 of my tank, so every fuel stop was the relax point . We took some extra time in relaxing our body and mind.  Updating Mr.Avinash at every fuel station was done at that time.  The irony is that, I had hard times, with sun burns and rashes, especially in my hand between the gloves and armour .  1 inch of my hand was so dark that it was obviously seen more than my natural dark colour, ( lol ).  Hubli road was risky being a single track road with no dividers in between.  A fresh country style nimbu pani near Pune refreshed my mind and helped me keep going.

When we reached Pune we got stuck in the worst traffic and rain and wasted and lost 2.5hrs, which gave us the clue to sacrifice our sleeping time during our forth coming night stay @ Hubli.

We reached Hubli late in the night with many detours. We closed the Full Throttle 1000 miles odometer reading in a bunk a bit away from our hotel took some pics and got the witnesses signed in the hotel. We checked in at 2.45am.  A power nap, 30 ins of cold shower and bam .. I was ready and waked up.   Uday and I were out of the hotel at 4:30am and started our completion to King of the Road 1500 miles.

This part of the ride was not as easy as we thought.  Our bikes were moving slow. I was slightly skeptic … And Surprise !… one phone call from Mr.Sankar SG at the right time and his motivating words to push hard as he monitored the drop down in speed – pepped up the whole mood and then we actually started covering the average speed as we came to know we were doing multiple recognition rides.

As Uday had mentioned in his write up – he was almost drained after Bengaluru and riding for that 300 kms was like 3000 kms. Thanks to our blue tooth headset – Sena20s which kept us connected during our tough times. We reached Coimbatore on 08/05/2016 at 3:00 pm after lots of breaks and was happy to see our witness Mr. Ramoo, waiting to endorse the completion of our King of the Road -1500 miles in 35 hours.  I was so happy to see my Wife and my Son awaiting with love and respect, and their eyes saw me as a Hero.

After all WOLO – We Only Live Once!

My Sincere thanks to:

My Sincere thanks to the Service team at Coimbatore HD, Mr. Praveen & his Team.